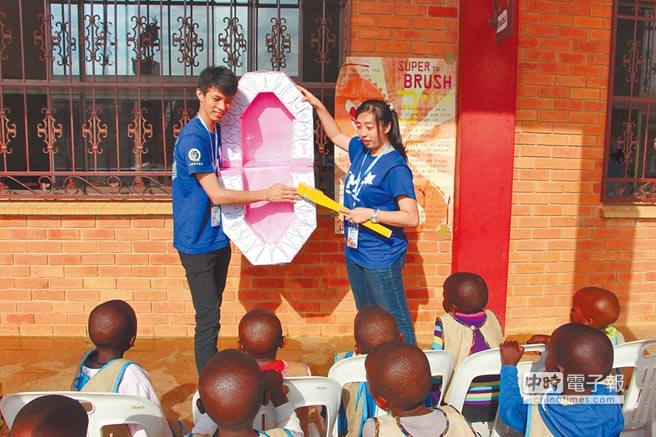 Taipei Medical University students taught the children in Swaziland about the oral health education. (Provided by Ministry of Education)

The international volunteer service is becoming more and more popular for Taiwan’s students! According to the statistics gathered by Youth Development Administration, Ministry of Education, a total of 287 students groups received the subsidies and 3,004 students provided services overseas as volunteers, beyond the expectation, 2,000 persons, by 50%. 2,270 persons out of them, i.e. 75%, provided the services in the New Southbound countries, including Thailand, Myanmar and Malaysia as the top three priority countries.

Section Chief of Youth Development Administration, Ministry of Education, Tai Lin-Ai, indicated that in the global age, the youth should have the global mobility and become more competitive in their career in the world. After Tsai Ying-Wen was elected as the President, the ruling party defined overseas volunteer services as the key work. Department of Youth Development, Ministry of Foreign Affairs and Ministry of Health and Welfare also formed the interdisciplinary promotion commission to help students provide services overseas as volunteers.

Department of Youth Development prepared the budget amounting to NT$7 or NT$8 million to help student volunteer groups last year. Each group received the subsidies no more than NT$20 million. According to the statistics, a total of 287 student groups, consisting of 3,004 persons, provided services overseas as international volunteers, including 237 university student groups consisting of 2,133 persons and 50 senior high school student groups consisting of 871 persons, beyond the expectation, 2,000 persons. Department of Youth Development will prepare the budget amounting to NT$10 million this year to encourage more students.

Tai Lin-Ai revealed that though student groups would receive the subsidies by the government or school for being international volunteers, each student still had to bear some expenses on their own. For example, for being international volunteer in South East Asia countries, each person would have to bear NT$10,000~NT$15,000 on his own to engage in the volunteer service for one or two weeks.

According to the statistics gathered by the Department of Youth Development, Taiwan’ students have provided services in 30 countries in the world last year, 75% of which were the New Southbound countries, including Thailand, Myanmar and Malaysia as the top three priority countries. These countries also included France, Israel, Canada, Swaziland and Belize, et al.

“I worked as volunteer in Cambodia for 30 days in last summer vacation. I paid NT$12,000 on my own. I think it’s worth it.” The senior student of CYCU Department of Psychology, Chiu Han-Yu, participated in the international volunteer service with the money she earned for working part time in Watsons. After seeing that the local children tried very hard to learn even in the tough environment, she cherished what she owned more after returning to Taiwan.

Taipei Medical University’s Fong-Xin Overseas Swaziland Medical Team, consisting of 7 students, 4 dentists and 1 leader, as a total of 12 people, worked as the international volunteers in Swaziland for two weeks in last winter vacation. The service included the dentist’s volunteer clinic service and oral health education. Each member had to bear NT$25,000 on his own.