Renovation of Old Computers and CYCU Do Charity with Enterprises

The group consisting of CYCU Department of Electronic Engineering teachers and students is the only university group that is engaged in routine renovation of computers for public welfare.  The “Application of Sites and Service Design” courses were organized through the Department Chair Chang, Yao-Jen. The students engaged in repairing the old computers donated by enterprises by the fixed shift arrangement and also designed the unique record for the computers to target the donation at public welfare groups to provide them with the computers with the “turnkey system”. These computers were donated to the rural and mountain areas in Taitung and Pingtung at the farthest. Some students graduated from CYCU, who now hold positions in the Institute for Information Industry, led employees and colleagues to head for Kenya and Ethiopia in Africa to spread the charity in the world.

CYCU College of Electrical Engineering and Computer Science organized the Service-Learning results presentation ceremony in the morning of 6th day. With respect to the “Application of Sites and Service Design” courses organized through the Department Chair Chang, Yao-Jen, the students held a presentation to introduce the learning results for renovation and reuse of the second-hand computers.

Chang, Yao-Jen has led the student group to renovate second-hand computers since 2006. In 2012, he worked with Microsoft and Frontier Foundation, Taiwan officially in 2012, and activated the subsidy-free and indefinite “NPO Second-Hand Computer Donation” Project, according to the tech soup plan. The CEO of Frontier Foundation, Tsai Shu-Fan, indicated that though a lot of universities have organized the computer renovation activities for public welfare, CYCU Department of Electronic Engineering is still the only school unit engaged in routine repair of computers for public welfare.

Frontier Foundation controlled the sources of computers donated by enterprises and established the audit system. Each donated PC would be assigned a serial number. The donor could confirm whether the PC is “under maintenance” or “donated” via the system. CYCU Department of Electronic Engineering teachers and students were responsible for renovating computers and installing the official operating system and paperwork software donated by Microsoft therein to provide each NPO donee with the computer installed with the “turnkey system”. 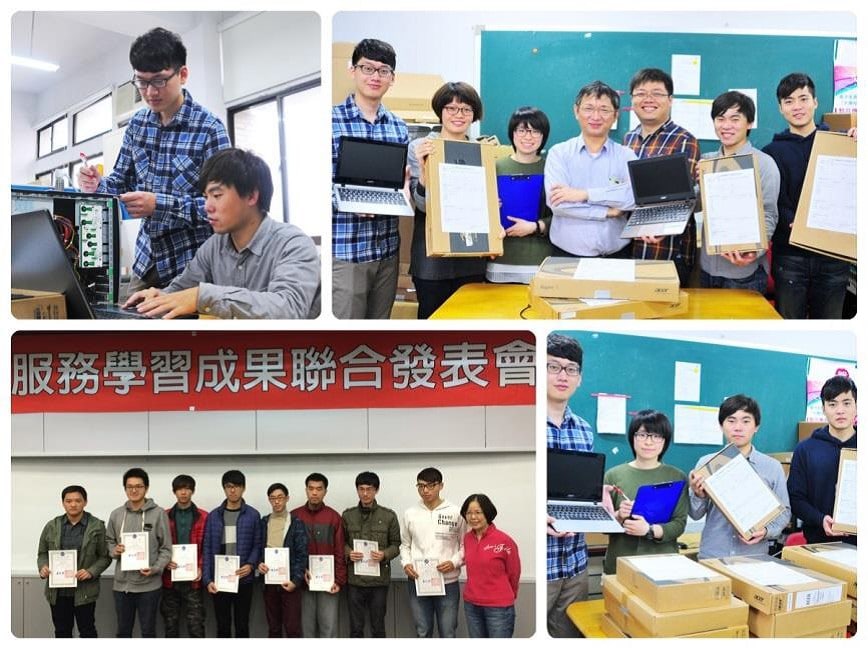 In addition to the external resources provided by Microsoft and Frontier Foundation, the public welfare business primarily relied on the permanent operation and efforts made by the Department of Electronic Engineering core graduate students. Chang, Yao-Jen emphasized that without these students’ passion, the public welfare business for renovation of computers was not likely to continue. The student in the second year of the Master’s program of Department of Electronic Engineering, Wu Kuo-Chih, has worked with Chair Chang in a project and started to engage in the renovation of computer since he was a junior student of the Department. After the practice training for few years, he is serving as the seed trainer for the courses to lead the student group responsible for maintenance. The student in the first year of the Master’s program, Kao Chia-Chun, was responsible for arranging the work shift for students of other departments and providing technical guidance to them. The student also in the first year of the Master’s program, Lu Kun-Lung, set the target for repairing no less than 5 computers each day.

The results achieved by the teacher and student group, which has engaged in the maintenance work diligently for several years, were also improved by some alumni of the school once again. An alumnus surnamed Chuang graduated from Department of Electronic Engineering for 12 years and now holding the position as project manager in the Institute for Information Industry has voluntarily led employees and colleagues to head for Kenya and Ethiopia in Africa to set up computer classrooms for the NPO, teach the locals about computer courses and handle the computer maintenance work.

According to Chang Yao-Jen, on April 22, 2014, namely the World Earth Day, 600-member companies of American Institute in Taiwan all joined in donating computers. As a result, a total of 220 donated computers were received in 2015, the most in the history. So far, the teachers and students have completed repairing and delivered 45 computers. On the same day when the presentation was held, 30 renovated computers were delivered. In the past five years, the group kept repairing 50~100 computers each year.

The renovated computers were once delivered to the rural and mountain areas in Taitung and Pingtung at the farthest. The volunteers also helped set up the computer classroom in De En Community Care Center in Pingzhen, Taoyuan, so that the Care Center’s elementary school students could learn computer and do their homework with computer. The CEO of Frontier Foundation, Tsai Shu-Fang, revealed that the Foundation has played the role as an intermediary for the past years and received a lot of opinions fed back by the donees. A priest from Taitung found that each computer owned its exclusive “resume” upon receipt of the computers repaired by Chair Chang’s group, he took a picture of the computers and mailed the photo back to show his appreciation. In the present age in which the cloud technology is under development, the computer renovation work continued for 9 years was once questioned by the outsider not the “high-tech” conduct but only disassembly and repairing work. Notwithstanding, by the feedback from students and donees, Chair Chang’s Refurbished Computer business will be continued, in hopes of continuing to pass on the positive effect and responsibility of the technology toward the society and developing the Service-Learning spirit.